Teaser Tuesdays is a weekly bookish meme, hosted by MizB of Should Be Reading. Anyone can play along! Just do the following:

2. Open to a random page

3. Share two (2) “teaser” sentences from somewhere on that page BE CAREFUL NOT TO INCLUDE SPOILERS! (make sure that what you share doesn’t give too muchaway! You don’t want to ruin the book for others!)

4. Share the title & author, too, so that other TT participants can add the book to their TBR Lists if they like your teasers!


My current read is The Girl in the Steel Corset by Kady Cross and my two lines are from location 2337 of 4517:

Pain shot through her face. Stars danced before her eyes as they rolled back into her head and her knees buckled.


The Girl in the Steel Corset by Kady Cross 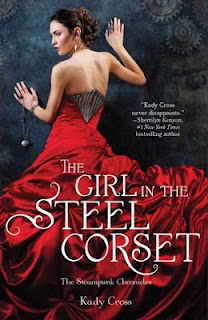 In 1897 England, sixteen-year-old Finley Jayne has no one…except the "thing" inside her

When a young lord tries to take advantage of Finley, she fights back. And wins. But no normal Victorian girl has a darker side that makes her capable of knocking out a full-grown man with one punch.

Only Griffin King sees the magical darkness inside her that says she's special, says she's one of them. The orphaned duke takes her in from the gaslit streets, against the wishes of his band of misfits. And Finley thinks she might finally be a part of something, finally fit in—until a criminal mastermind known as the Machinist threatens to tear the group apart….
Purchase: Book Depository

Posted by Sapphired Dragon at 23:13

Email ThisBlogThis!Share to TwitterShare to FacebookShare to Pinterest
Labels: 2013, Kady Cross, May, Steampunk Chronicles, Teaser Tuesday, The Girl in the Steel Corset